When do you have the best quality eggs ?

When do you have the best quality eggs ?

HomeNews & ArticlesWhen do you have the best quality eggs ? 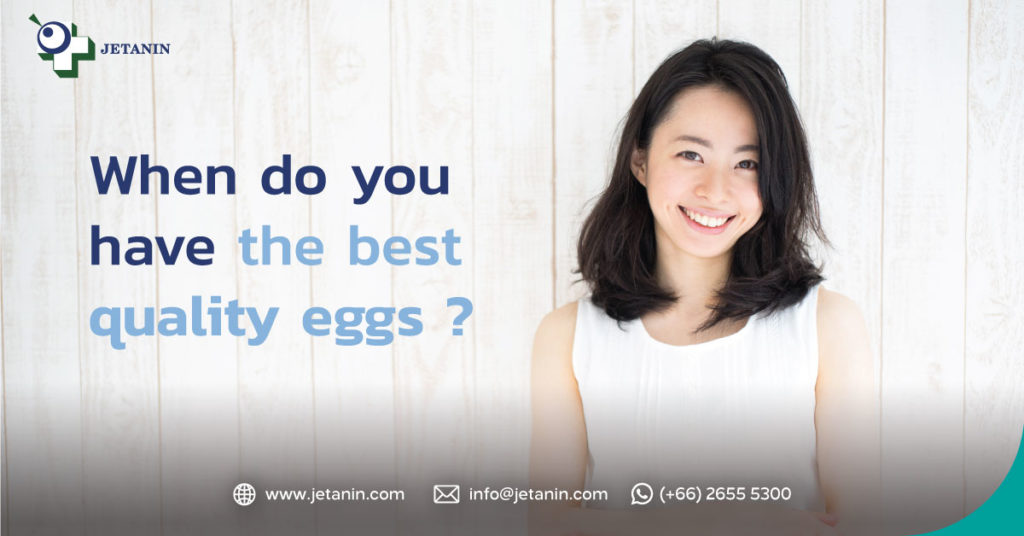 In modern times, egg freezing (oocyte cryopreservation), is another option that many women are interested in. In this topic, we will explain the benefts of freezing eggs at a younger age.

Researches have shown that women are most fertile and have the best chance of getting pregnant at 25 years old. But at this time many women do not think about egg freezing for future family planning. The vast majority of women who freeze their eggs are aged 36-40 years. The quality of eggs in women aged over 35 years (Advance Age) starts to decline. Therefore, the ideal age for freezing eggs would be over 30. That is 31-35 years old.

“Mitochondria”are found both in oocytes and granulosa cells (GC) that generate chemical energy needed for eggs chromosomes division and early embryonic development. Mitochondria have their own genetic set called mtDNA (Mitochondria-DNA). Research shows that as women age, the eggs contain less mtDNA, indicating a lower number of mitochondria, causing the embryo to have more abnormal divisions of chromosomes.

Telomere is part of the end of each chromosome that get shortened when the cell divides. As we get older, the telomeres will get shorter. Telomeres can also be shortened by other causes including oxidative stress caused by stress, pollution, cigarettes, alcohol, etc. Telomeres are important in preventing non-disjunction (a condition in which chromosomes fail to separate properly during cell division), Research has shown that the shorter the telomeres, the more likely it is to cause this condition. As a result, women over the age of 35 suffer from recurrent miscarriages. Because the embryo has abnormal numbers of chromosomes.

Cohesin is a protein that mediates between sister chromatids cohesion. As we get older, less protein is created, causing chromosomes to not stick together when chromosomes divide. In addition, there’s stress and ROS (free radicals) that reduces this protein as well as telomeres (4).

Spindle fibers are formed from microtubule fbers that together pull the chromosomes when they divide.

As you get older, the fbers degrade causing poor chromosome division resulting in the embryo having either fewer or more chromosomes than usual or known as Aneuploidy

Because the egg quality is affected by chromosomes, thus, women over the age of 35 are 30% more likely to have a baby with genetic disorders and an increase of more than 90% by the time women are over the age of 44 , such as Down Syndrome, Patau’s Syndrome and Edward Syndrome.

How many eggs should be frozen in order to have a baby in the future? Currently, it is not possible to determine how many eggs should be frozen to ensure a successful IVF, the number depends on many factors including age, health and family planning which differs from person to person. Research has shows that statistically the number of eggs decreases significantly with age.

While fertilization success decreases with age, there’s a signifcant drop at the age of 40-44 and gets much lower over the age of 45

Therefore, freezing your eggs while young will result in more eggs and a greater chance of getting a good quality embryo with normal chromosomes. This increases the chance of a successful IVF and the baby is born with a lower risk of developing a genetic disease